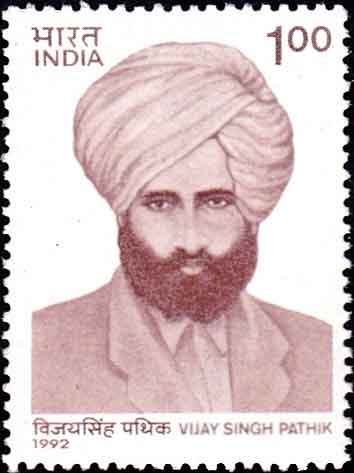 Vijay Singh Pathik (1882-1954) was a prominent freedom fighter, peasant leader, journalist, poet, author, educator and historian who worked tirelessly throughout his life to combat both imperialism and feudalism on many levels .

At some level, he was active in the Indian National Congress, fulfilling important responsibilities in Rajasthan in particular but also in other areas. However, he had started life as a revolutionary in the Gadar party and kept in touch with later revolutionary movements as well for some time. Thus, he was a distinguished example of those freedom fighters who had been active in both streams of the freedom movement. However, he is best known for his long struggle against feudal forces – the jagirdars allied with the colonial rulers – as the leader of the peasant movement centered at Bijoliya Jagir in central Rajasthan.

Pathik’s original name was Bhoop Singh and he was born in 1882 to a family of freedom fighters in what is now Bulandshahr district of Western UP. His grandfather had sacrificed his life during the great uprising of 1857, while his father was also involved in freedom struggles. Inspired by them, he came into contact with the revolutionaries of the Gadar party and was given the task of leading the revolt in Rajasthan. Available accounts suggest he had succeeded to a remarkable extent, mobilizing many fighters in his base near Ajmer, but as the overall revolt collapsed due to earlier information reaching the British, he had to disband at haste its strength. Bhoop Singh has now become Vijay Singh Pathik, although out of respect some people have also called him Rashtriya Pathik. He was arrested but managed to escape and continued his wanderings.

At this point he came into contact with Sadhu Sitaram Das, a peasant leader who invited him to lead the peasant movement in Bijoliya. Here the peasants suffered greatly from overtaxation – there was even a tax to be paid at the time of the girl’s marriage, although the tradition was to help on such occasions.

Pathik excelled in this new role, bringing greater attention to peasant issues with his writings and improving the organizational base by establishing the Bijolia Kisan Panchayat with the help of other leaders. The movement has grown as greater awareness of its activities has led to a similar awakening in other jagirs facing similar issues. Although this can be seen more clearly in closer areas like Bhinder, Begun, Parali and Basi, the impact has also reached further afield in Alwar and Bharatpur. Pathik has also met with senior congressional leaders like Lokmanya Tilak and Mahatma Gandhi to keep them well informed on these issues. There was a lot of repression in Bijoliya which sometimes took very cruel forms. However, people continued their movement, while changing tactics from time to time. Finally, an agreement was reached in 1922 that significantly reduced excess taxation and practices like forced labor.

However, at the same time, to prevent a wider revival, highly repressive measures were taken the next year in Begun, resulting in 11 deaths and mass arrests. Pathik also made it here and towards the end of the year a compromise agreement was reached.

With his growing popularity, Pathik was becoming a thorn in the eyes of colonial rule as well as feudal forces, and he was soon arrested. He was released from prison in 1928. He went to Kanpur for a time to work with Ganesh Shankr Vidyarthi, the prominent Congress leader of the UP who had become a link between the mainstream freedom movement and the revolutionaries. Pathik wrote extensively in his diary to draw attention to the problems of people living in the princely states and he soon became an important spokesperson for the Praja Mandals who performed a similar role in Congress in those princely states.

It is remarkable indeed that in the midst of this he also found time to create and edit newspapers and periodicals. As these were primarily concerned with opposing feudal and colonial forces, some of these ventures did not last long but still made significant contributions to the freedom movement. He wrote several poems and songs, some of which became very popular with freedom fighters, as well as plays and inspirational stories. He wrote detailed essays on the republics of ancient India. While his most inspiring work was in Rajasthan, in his later years his stay in Kanpur and Mathura also brought him back to some activities at UP where he was born. He breathed his last in 1954.

A postage stamp has been issued in his name and several places bear his name, but it is clear that there is a need to better publicize the ideas and work of Pathik who has contributed so much in various ways to the cause of freedom , justice and exploitation. -free society.

Bharat Dogra is known for his book and pamphlets on freedom of movement, the latest being When the Two Streams Met and Azadi Ke Deewanon Kee Daastaan.

Poet, educator and freedom fighter who left her mark on Indian literature

Who is the freedom fighter Pandurang Khankhoje whose statue will be inaugurated in Mexico?

Ballia to get medical school and freedom fighters memorial: CM