Rebel and freedom fighter, Elaine Mokhtefi translates their remarkable life in the memories of her husband

(RNS) – From Fidel Castro to Ho Chi Minh, Elaine Mokhtefi has met some of the most important socialist revolutionaries of the 20th century.

Born into a Jewish family in Hampstead, New York, in 1928, she suffered from the anti-Semitism of the time and quickly developed an interest in progressive politics. At the age of 16, she was accepted to Wesleyan College in Georgia. Yet after a year in Christian school, she was expelled for her objection to the segregationist policies of the time.

She became involved in various movements for peace and justice on the eve of World War II and after the war moved to France to work as a translator for various political groups. In 1960, she was part of a small group that lobbied the United Nations on behalf of the Algerian National Liberation Front (FLN).

â€œThey never questioned my religion or where I came from. It speaks very well of these men, â€Mokhtefi told Religion News Service. â€œI felt very comfortable and I was a product of discrimination myself, so there was a very deep understanding of our mutual experiences. I was in perfect harmony with them.

“I was a French Muslim”, by Mokhtar Mokhtefi. Courtesy Image

Indeed, it was Algeria that was to become the center of his life in many ways. She will eventually marry Mokhtar Mokhtefi, an Algerian freedom fighter. Mokhtefi’s translation of her husband’s memoir, “I was a French Muslim,” will be published in September by Other Press.

â€œIt was essential that he tell the truth,â€ Mokhtefi said. â€œ(The memories) reflect his disappointment with independent Algeria. He was disappointed that Algeria had failed to defend the ideals of democracy, justice and freedom.

Algeria gained independence from France in 1962, but her husband’s disappointment is apparent in the last passages of the memoir as the author visits a free Algeria for the first time against the wishes of his FLN superiors. However, despite these initial disappointments, the Mokhtefi will live in Algeria after independence, and she will work as a translator and facilitator for a number of rebel groups.

During the 1960s, an independent Algeria opened its doors to groups around the world, including the Black Panthers, with whom Mokhtefi personally interacted.

“They only really saw each other on a romantic plane,” Mokhtefi said of the Black Panthers and the Algerian government. “For the most part, the Black Panthers’ opinions on Algeria were forged through the writing of Frantz Fanon and the film ‘The Battle of Algiers’,” she said.

“(The Black Panthers) had never been abroad and ended up in a third world country that had very little technical capability. On the other hand, the Algerians viewed the Black Panthers as part of another. discriminated group.

She and her husband were quickly disappointed with the illiberal turn of independent Algeria and moved to New York. Still, it wasn’t until after the turn of the millennium that the couple began working on separate books on the historical period in which they both played key roles. 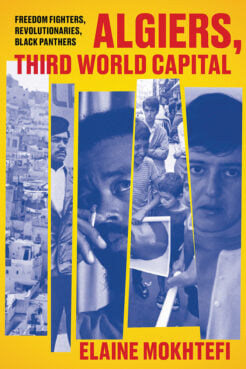 Mokhtefi published her own book, “Algiers, capital of the third world: freedom fighters, revolutionaries, black panthers”, in 2018. Three years after the death of her husband, her memoirs were still not published. His work is heterodox compared to other memoirs of the time in part because of its portrayal of religion and its portrayal of European settlers as individuals.

When Mokhtar Mokhtefi was born in 1935, there were approximately one million Pied-Noirs or European settlers living in Algeria. The overwhelming majority supported the continuation of union with France, although a handful were exceptions. “I was a French Muslim” includes his meetings with members of the Catholic clergy sympathetic to the Algerian cause for independence.

â€œThese members of the worker-priest movement were exceptional and offered very strong support to the Algerian cause, which tempered his views vis-Ã -vis France. Among them were some very beautiful personalities, who took enormous risks, â€Mokhtefi said.

These priests even helped her husband to travel to France, where he met a Bosnian doctor working as a cook who hoped to join the FLN. Decades later, the flow of foreign fighters was in the opposite direction when many Algerians fought for Bosnia in the early 1990s.

The book includes some examples of how popular Islam has mingled with the leftist ideology of the FLN. An oft-told story is that of a truck full of FLN guerrillas who are pulled over for inspection at a French checkpoint. However, when the French lifted the hatch on the back of the truck, the French soldiers only found a truck full of sheep.

“There were a lot of stories like this during the Algerian war, and it was one of the most famous,” Mokhtefi recalls. â€œPeople seemed to believe in miracles during the war. Yet the victory was the real miracle. Who would have thought in 1954, at the start of the armed struggle, that the Algerian people, with their bare hands, old rusty French rifles, were capable of defeating the fourth military power of the time?