In 1964, he left the national council of the Communist Party of India to become one of the founding members of the dissident party CPI(M)

In 1964, he left the national council of the Communist Party of India to become one of the founding members of the dissident party CPI(M)

Former Chief Minister of Kerala, freedom fighter and veteran of the Communist Party of India (Marxist) [CPI(M)] The VS leader Achuthanandan turned 99 on Thursday.

Chief Minister Pinarayi Vijayan greeted the nonagenarian communist on his birthday by posting a smiling photo of Mr Achuthanandan on his Facebook account.

“My sincere compliments to Comrade VS on his 99th birthday,” Mr. Vijayan wrote.


Mr Achuthanandan, widely referred to by his initials, ‘VS’, disappeared from active public life following a minor stroke in 2019.

Doctors quarantined him, given his advanced age and susceptibility to infections.

Mr. Achuthanandan currently runs an assisted living facility with his wife and son’s family in Thiruvananthapuram. VS Achuthanandan on his 96th birthday at his residence in Thiruvananthapuram | Photo credit: MAHINSHA S

VA Arunkumar, his son, told a TV station that Mr Achuthanandan remained conscious and was visibly saddened when he was informed of the death of his longtime party colleague and member of the CPI(M) political bureau. , Kodiyeri Balakrishnan, recently. 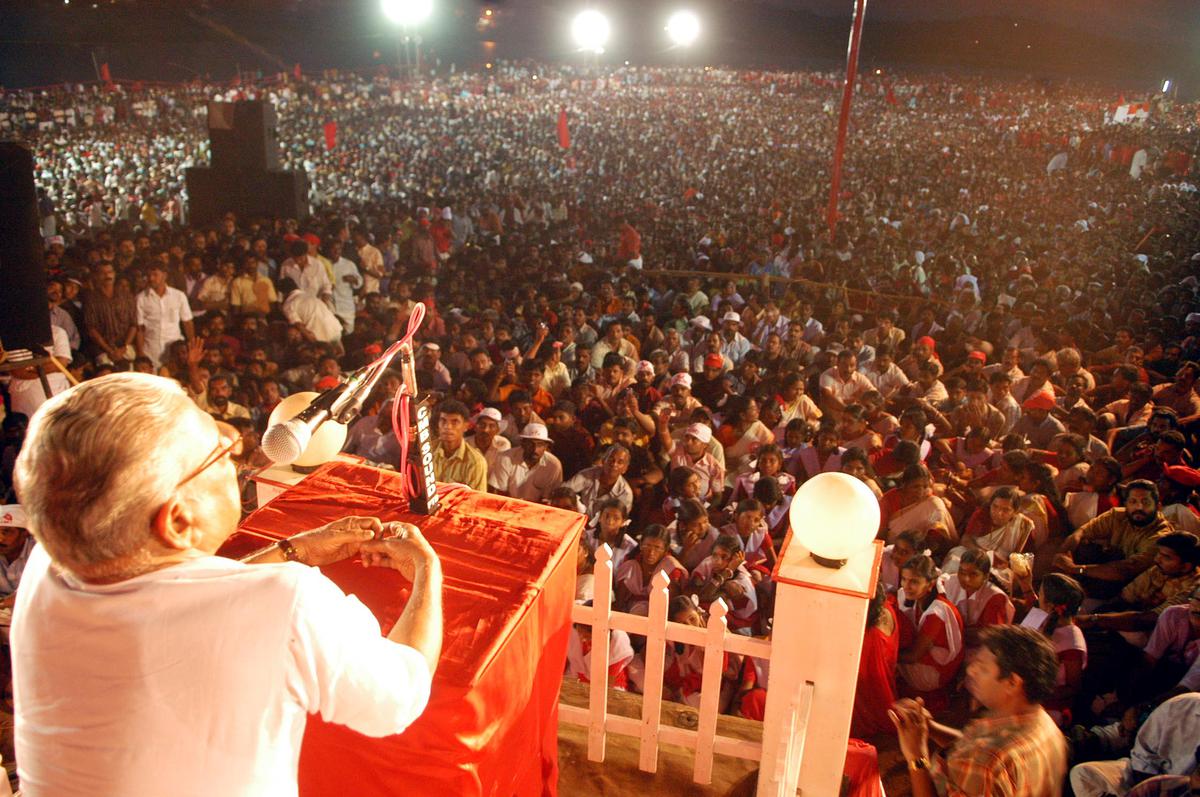 Mr. Achuthanandan was born into a family of farm workers at Punnappara in Alappuzha. He lost his parents early and was introduced to the liberation movement at age 16 by pioneer communist leader P. Krishna Pillai.

“I consider Comrade Krishna Pillai as my guru,” he said in an interaction with primary school students when he was chief minister during the period 2006-2011.

Mr Achuthanandan cut his teeth as a political organizer and agitator organizing workers at the Aspinwall factory in Alappuzha. 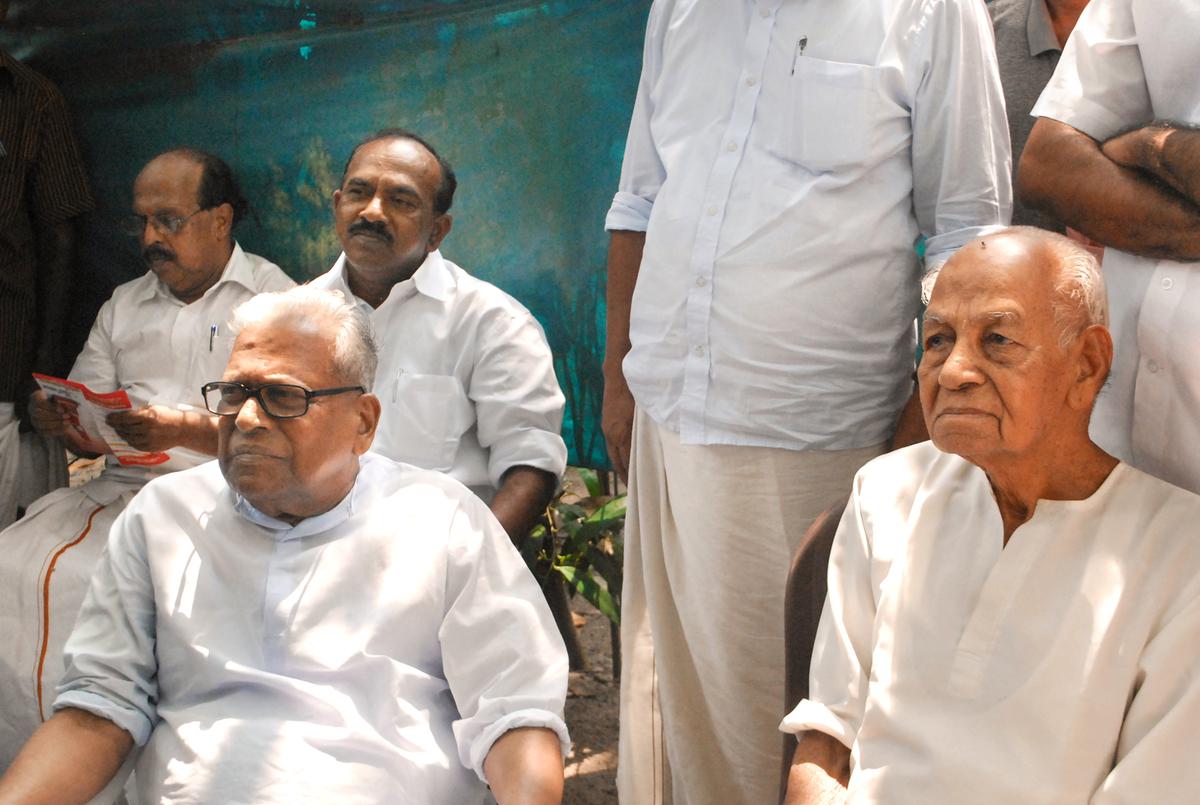 VS Achuthanandan and PK Chandranandan (right), who had fought alongside Achuthanandan in the Punnapra-Vayalar uprising, attending a meeting in commemoration of the uprising in Alappuzha.

He joined the communist movement in 1940 and was actively involved in the militant leftist agitation against the colonial government in 1946 which led to the Punnapra-Vayalar uprising which claimed the lives of around 470 communist revolutionaries, mostly farm laborers armed with nothing but wooden spears.

Mr. Achuthanandan was imprisoned and tortured by the colonial powers following the agrarian uprising. VS Achuthanandan hoisting the flag for the conference of delegates at the CPI(M) state conference in Malappuram in 2005. The then CPI(M) Secretary General Harkishan Singh Surjeet and Secretary of State Pinarayi vijayan | Photo credit: RAMESHKURUPS

In 1964, he left the national council of the Communist Party of India to become one of the founding members of the dissident party CPI(M). Later, the government imprisoned him during the national emergency.

Mr. Achuthanandan has made a name for himself as an anti-corruption campaigner by involving himself in corruption cases, including the Idamalayar trial which resulted in the conviction of the late Kerala Congress leader, R. Balakrishnan Pillay. VS Achuthanandan in 2015 in Munnar, where thousands of mostly female tea garden workers were on strike demanding a 20% bonus and rupees. 500 per day daily wage. | Photo credit: SPECIAL ARRANGEMENT

As Chief Minister, Mr Achuthanandan launched a demolition campaign to evict the land grabbers from Munnar. Also, as adopted by Richard Stallman, he campaigned for free software.

Mr. Achuthanandan has also led the clean water agitation against the Coco Cola Company in Plachimeda, fought against land grabbers in Mathikettan and defended women’s rights. He acquired the public image of a crusader for popular causes and a standard bearer for underdogs and lost causes.

As a speaker, Mr. Achuthanandan’s speech had a distinctive flavor characterized by a rustic drawl bristling with biting sarcasm and hard-hitting humour.

His articulation style became the staple of political satirists and television comedies.

A rebel within the party


Mr. Achuthanandan, who had served as the CPI(M)’s secretary of state, was not always a follower of party discipline.

In 2007, the CPI(M) expelled him from the party’s political bureau for openly defying the CPI(M) State Secretariat. Mr. Achuthanandan is widely seen as a dogmatic communist who rarely retreats from his ideological moorings.

However, his critics have criticized Mr Achuthanandan for allegedly disagreeing with the harsh realities of neoliberalism, accusing his party colleagues of right-wing deviation and “complicity with factionalism”.