Hoshiarpur (Punjab): It was March 13, 2022. A gathering of 200 people in a small hamlet in Indian Punjab responded to an unusual slogan: “Down with British imperialism!” Long live India!”

They were talking about Bhagat Singh from Jhuggian village in Hoshiarpur district, an Indian freedom fighter who died on March 8 this year. He was 95 years old.

His parents, friends and comrades performed his last rites on March 13. Throughout their journey, the red flags they were holding were tilted at 45º. It was as if the sun was setting a little early that day – even the sky was mourning his death.

“He was our beacon in the dark,” said one of his friends, Darshan Singh Mattu, a member of the CPI(M) Punjab State Committee. “Without him, there will be darkness around.”

‘He was our torch in the dark. Photo: Amir Malik.

All his life, Bhagat Singh Jhuggian lived in relative anonymity.

Stories of his struggles against the British Empire would have been lost if award-winning journalist P. Sainath, founding editor of the People’s Archives of Rural India (PARI), had not interviewed him last year.

Young Bhagat Singh started out as a courier for the revolutionary underground. He would operate a printing press and provide food in the middle of the night to underground freedom fighters. At that time, he told Sainath: “The police were more afraid of me than I of them. 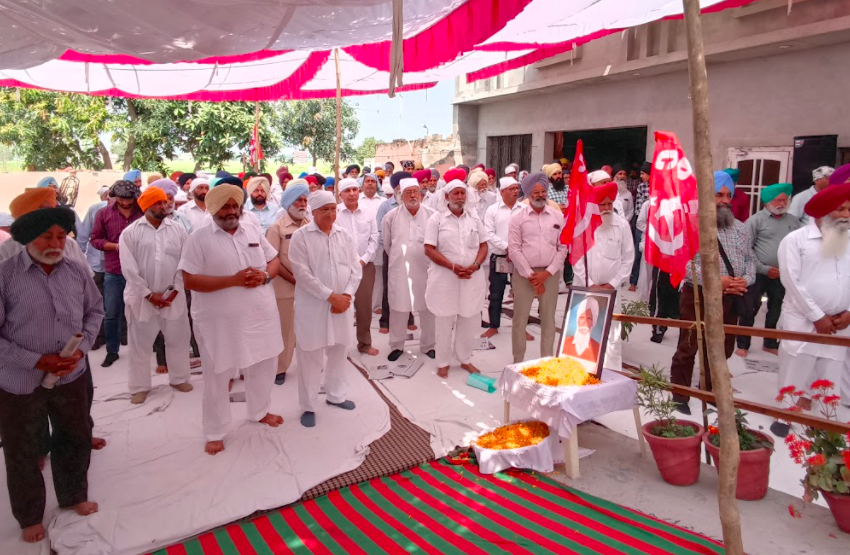 “It felt like the sun was setting a little early that day – even the sky was mourning its passing.” Photo: Amir Malik

As the British returned home, they left India to face the horrors of partition. Massacres of countless thousands began as people rushed to cross borders.

Bhagat Singh Jhuggian, and many others like him in India, were among those who wanted to rescue Muslims from attackers and stealthily bring them home. “It would serve Muslims leaving India and heading to the new Pakistan food and sharbat”, said Darshan Singh Mattu.

Even in the chaos, he ensured that those who had lost their homes did not have to go hungry.

In 1948, Singh led a movement against big landowners and had to spend three months in prison. Four years later, landless peasants obtained land because of the agitation he had led. A year later, along with his three comrades – Badhawa Ram, Rajinder Singh Srinh and Gurcharan Singh Randhawa – Singh boldly escaped from Ludhiana prison through a tunnel.

In 1953, the Punjab government imposed heavy water taxes and Singh was driven to struggle again. After spending three months in prison, the decision to impose taxes was reversed.

Singh also spoke out against a lathicharge against Moga students in 1972 and was incarcerated in Hoshiarpur jail for 45 days. In 1973, during a movement against inflation, he and 35 of his comrades were arrested in Chandigarh. He was imprisoned for three months in Patiala prison. In 1974, he was again in prison, arrested during one of the Kisan Sabha meetings.

In 1975 he was arrested while speaking on stage against the emergency. He spent 14 days in Hoshiarpur prison. He later went underground, distributing anti-emergency literature and again playing the role of courier.

In 1980, he helped factory workers evicted by owners get back to work in a turmoil that lasted about 93 days. During these three months, Bhagat Singh Jhuggian organized food and other necessities for them. His fight against hunger was that of a lifetime.

In the same year, the Punjab government increased the bus fare by 43%. He fought against it. The government issued an arrest warrant for him but failed to catch him.

Singh also received constant threats from the Khalistanis in the 1990s, when Punjab was plagued by terror. A Khalistan activist – whose brother he had helped find a job – reportedly told others: “If Bhagat Singh Jhuggian is our target, I won’t have anything to do with it. It was told by Singh himself in Sainath.

“He took one route in the morning,” said Paramjit Singh, 51, the youngest son of Bhagat Singh, “and the other in the evening on his way back to avoid any encounters with extremists.”

He would keep detailed records of the accounts in journals. In this collection of old notes and logs I found two news clips from the 1980s. One is of a woman who was tortured by her in-laws and the other is the story of landlords. earthlings who seize the land of the poor. “He has always been very active on women’s rights and the rights of the poor,” says Paramjit.

“He was not very happy with the situation in the country,” adds Paramjit. 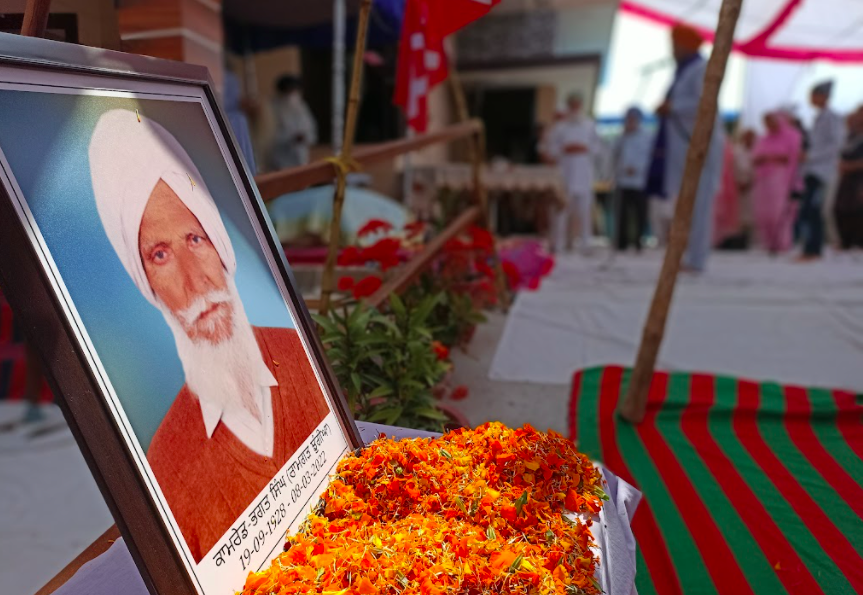 ‘In the same year, the Punjab government increased the bus fare by 43%. He fought against it. The government issued an arrest warrant for him but failed to catch him. Photo: Amir Malik.

Singh hoisted a black flag on his roof in protest against the three farm bills passed by the Union government. The law was later repealed following protests by farmers at Delhi’s borders. He was unable to join the protests at the borders due to his poor health, but has been busy organizing food and other necessities to be delivered to his comrades at the gates of the Indian capital.

“Till his last breath, he will live to guide the country, with his spirit intact,” says Darshan Singh Mattu.

During the funeral and as a pall bearer, I felt as if the mourners were mourning the death of freedom itself.

As Singh’s body was laid at the stake, Darshan Singh Mattu issued the slogan: “Britannia murdabad, Hindostan zindabad. He told the mourners that it was the same slogan that Bhagat Singh Jhuggian had launched at Samundra Government Elementary School. He was expelled from school.

The letter confirming his expulsion also had the assent of the then Deputy Regional Commissioner and called him “dangerous” and “revolutionary”. He was 11 years old.

This “dangerous revolutionary” is no more than the spirit of Comrade Bhagat Singh will live.

Amir Malik is a freelance journalist. He can be reached at [email protected]