On social media, people have shared a photo of an elderly woman claiming that she is Kamaladevi Hazarika, a revolutionary from Assam who gave a fitting response to a pastor who tried to convert her and her family, to Christianity.

In a nutshell, the story people told next to the photo was this: A pastor named Cruz was sent to Assam to promote Christianity. There he was employed by a prestigious family to teach a boy English. Soon the pastor realized that the boy’s grandmother was the most influential person in the family, and if he was able to convert her to Christianity, the whole family would follow.

The pastor then started telling the grandmother stories about how Jesus Christ healed leprosy, gave sight to the blind, etc. The grandmother, however, said it was nothing compared to the miracles of Lord Rama and Lord Krishna. Despite this, the pastor did not lose hope.

One day he brought a cake from church and offered it to the old lady. As soon as she consumed it, the pastor exclaimed that because she had eaten a church offering, she was now a Christian. The grandmother struck the pastor’s ear and told him that according to her logic, the fact that he ate at her house every day, breathed the air and drank the water in the land of Hinduism meant that he was now a Hindu.

Many have shared this story. Similar posts can be seen here, here and here.

The India Today Anti Fake News War Room (AFWA) has discovered that the woman seen in the photo is Kamaladevi Chattopadhyay, a well-known freedom fighter and social reformer from Mangalore, Karnataka. At the same time, there is no historical record of a revolutionary named Kamaladevi Hazarika from Assam. 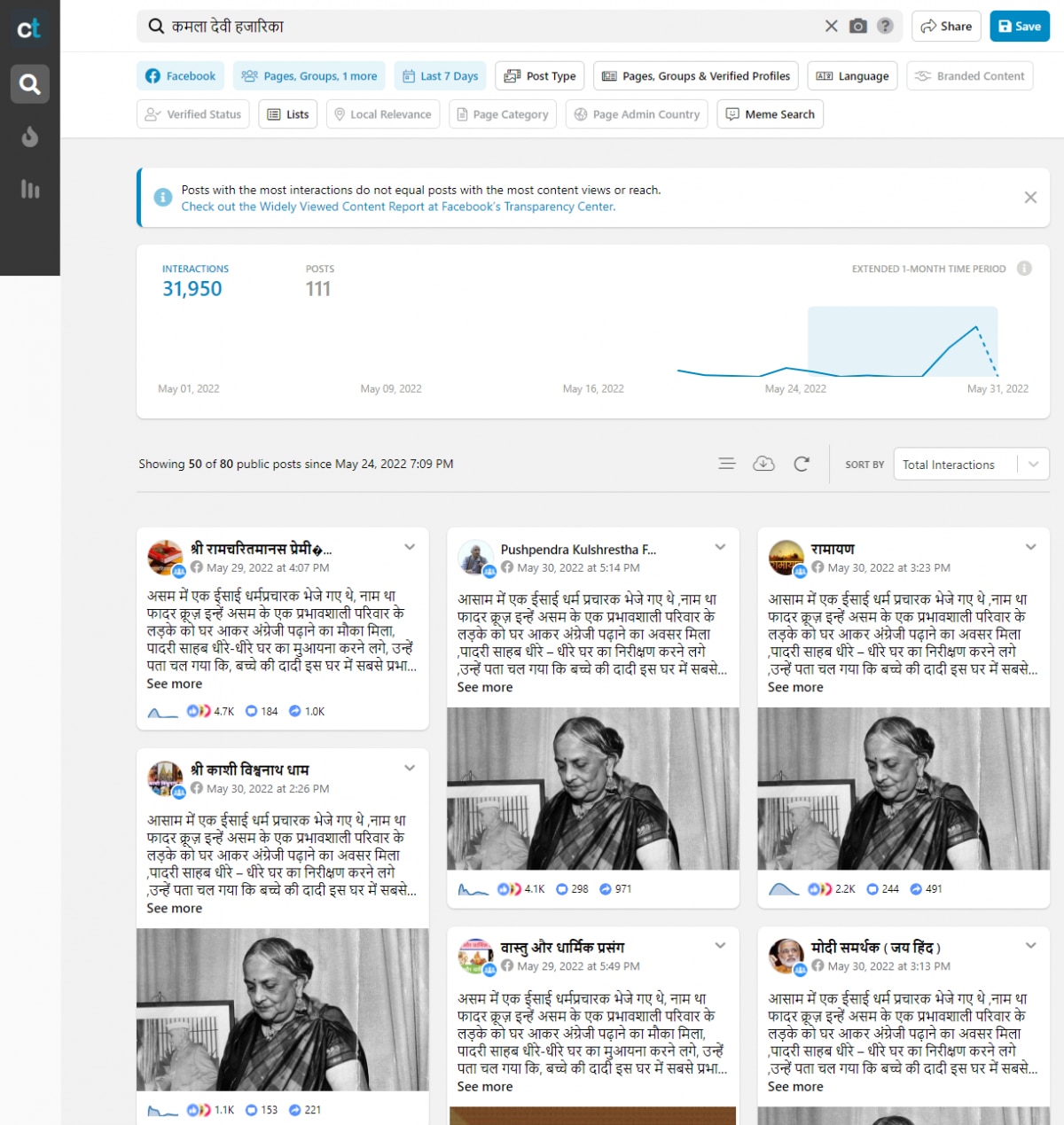 We found no evidence of a grassroots revolutionary from Assam called Kamaladevi Hazarika. Even searches in multiple languages ​​yielded no results.

However, we found that the same story has been circulating online since at least 2017.

What’s remarkable is that according to CrowdTangle, a social media analytics tool, this story was posted more than 100 times on Facebook in the past week and had almost 31,000 interactions at the time of posting. writing this story.

Who is the lady in the photo?

A reverse search of the viral photo led us to the site of the Center For Cultural Resources And Training, an autonomous Indian organization under the Ministry of Culture. The site said it was the photo of Kamaladevi Chattopadhyay, a notable social reformer, freedom fighter and art enthusiast. He also said that the CCRT was also started by Chattopadhyay.

Chattopadhyay has received several awards in recognition of his public service, such as Padma Bhushan, Padma Vibhushan, Ramon Magsaysay Award and UNESCO Award. She died in Mumbai on October 29, 1988, aged 85. 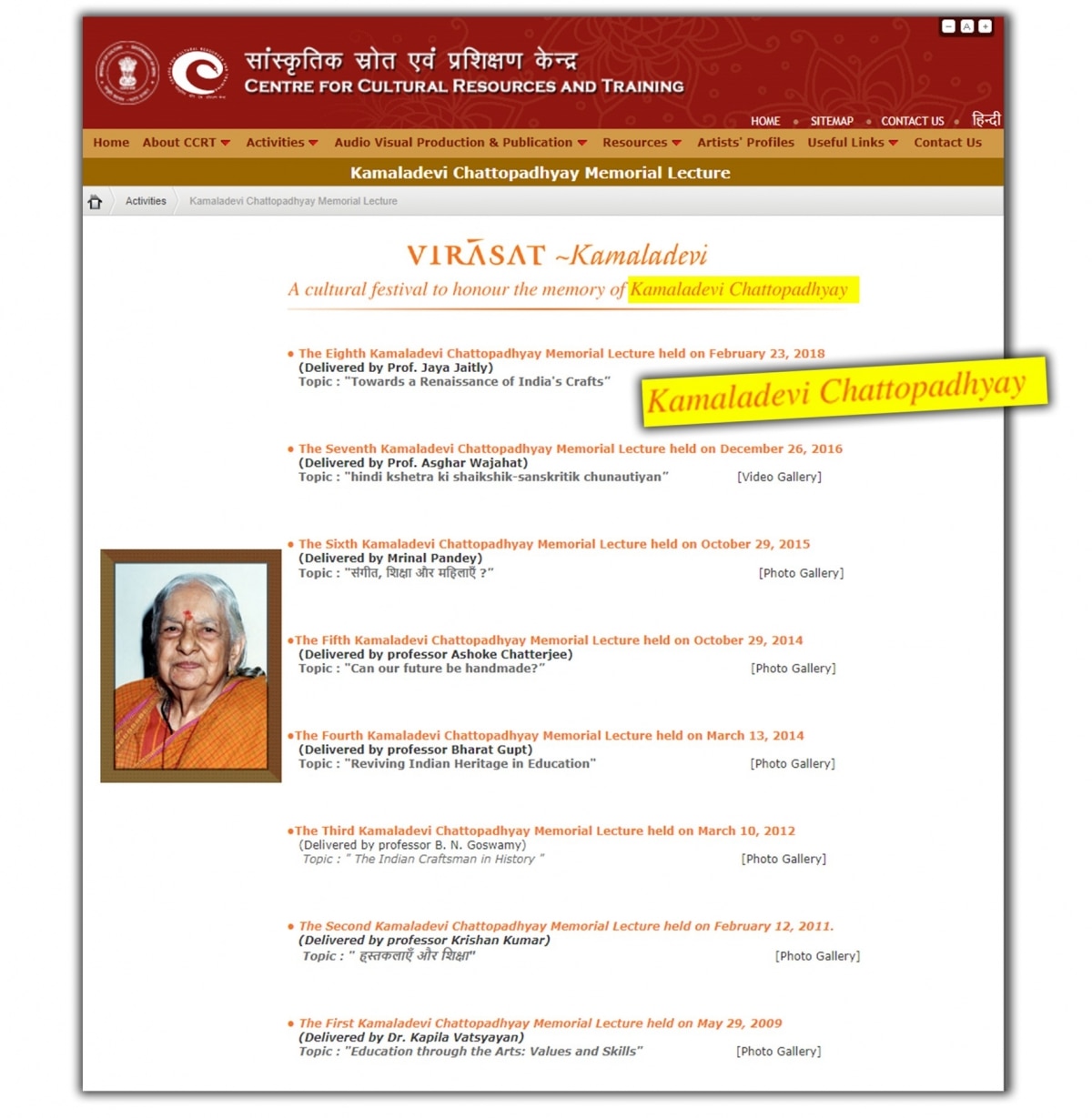 Chattopadhyay’s biography, “Kamaladevi Chattopadhyay Portrait of a Rebel”, written by Jamila Brijbhushan, is available on the Wayback Machine. Using keyword research, we tried to find if there was any mention of a pastor named Cruz. The search returned no results.

We sent the viral request to Sakuntala Narasimhan, the author of another Chattopadhyay biography titled “Kamaladevi Chattopadhyay: The Romantic Rebel”. Narasimhan told India Today that Chattopadhyay had not had such an encounter in his lifetime. “I met Kamaladevi and spent a lot of time with her before writing my book about her. I never heard of this story from Christian pastor Cruz,” she said.

We also asked Narasimhan if Chattopadhyay had any Assamese connection, to which she replied, “As far as I know, she had no Assamese connection. I also spoke to some of his former colleagues and freedom fighters, but never heard of his links to Assam.

To sum up, the photo of freedom fighter Kamaladevi Chattopadhyay has been shared by many people on social media with the claim that she is Kamaladevi Hazarika, a supposed Assamese revolutionary. We found no trace of Hazarika. We have also been unable to verify the veracity of the story which has been online since at least 2017. To claimThis old woman is Kamaladevi Hazarika, a revolutionary from Assam who gave a fitting answer to a pastor who tried to convert her to Christianity. ConclusionThe viral image shows famous Karnataka-born freedom fighter, Kamaladevi Chattopadhyay. We found no trace of Hazarika. We have also been unable to verify the veracity of the story which has been online since at least 2017.

The number of crows determines the intensity of the lie.