As a bridge between Congress and revolutionaries, he sacrificed life for communal harmony

By Bharat Dogra*
March 25 is the anniversary of the death of Ganesh Shankar Vidyarthi, a great publisher, a very dedicated freedom fighter and a lifelong crusader for justice and freedom who sacrificed his life at a young age of 41 years old in 1931 while trying to stop communal violence and rescue people trapped in Kanpur.
A Congress leader, the central location of his work was in the vast area of ​​the United Provinces. He was martyred just two days after Bhagat Singh, Rajguru and Sukhdev. This was seen as a very big setback at a critical stage in the liberation movement. Many people believe that Vidyarthi was trapped by the colonial rulers in a riot where he was to be killed without the government taking any blame for it.
This point of view gains credibility when one remembers that Vidyarthi had a very special position as a bridge between the Congress and the revolutionaries. Jawaharlal Nehru had a very high regard for him. It is apparent from the rich tributes paid to him by both Mahatma Gandhi and Jawaharlal Nehru, as well as the position he held as a highly respected leader of the United Provinces at a very young age, that his position in Congress was very strong.

Yet he also enjoyed the full confidence of revolutionary leaders such as Bhagat Singh and Chandra Shekhar Azad, the former having been trained by him as an assistant editor while still a teenager.
What is not so well known is that Vidyarthi was instrumental in channeling the high energy levels of young revolutionaries into more constructive achievements. Respecting his understanding and wisdom, the revolutionaries quietly consulted Vidyarthi regarding certain “actions”, and often Vidyarthi exercised restraint to prevent what would have been preventable violence.
As revolutionaries strove to have a more lasting impact on people through satyagraha-like actions and prison fasts from 1929 to 1931, the influence of mentors like Vidyarthi could be seen in this change.
At the same time, his role as editor was simply glorious. For 18 years in a row, with continuity, (1913-1931), he fought the colonial regime with one foot in power and the other in prison. Moreover, he was constantly fighting lawsuits from very powerful people. His journal “Pratap” became a prominent forum for the wider freedom movement as well as various struggles against various major feudal interests and royalty.
Furthermore, he has repeatedly addressed the issue of community harmony in his diary and has also assisted several efforts of citizens in this direction, especially in Kanpur. He played a leading role in the formation of an organization called Hindustani Biradari which organized programs on community harmony and joint celebrations of various festivals.
Vidyarthi has repeatedly warned people against falling prey to communal propaganda. He could foresee that to divert the rising tide of the freedom movement, the forces of imperialism will try to aid and incite the narrow communal forces on both sides. So he wrote many times against it. But even he could not have foreseen that his own life would be lost trying to control this violence.
By early 1931, the popularity of Bhagat Singh and other revolutionaries who had been imprisoned by the British was at its peak. In another case, Vidyarthi was also in jail but he was released just days before the hanging of Bhagat Singh, Rajguru and Sukhdev on March 23.
These revolutionaries were very near and dear to Vidyarthi. 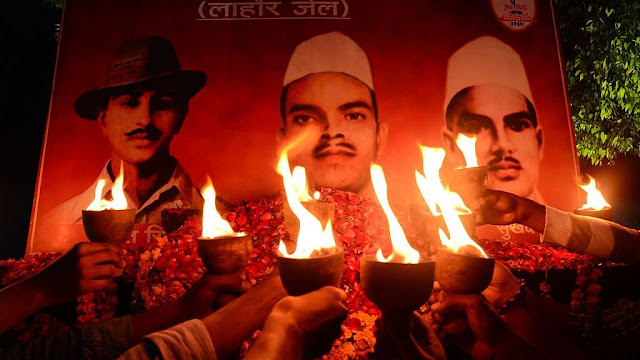 Given his great organizational ability and mass base, it is very likely that Vidyarthi may have mobilized the greatest opposition against the hanging of Bhagat Singh, Rajguru and Sukhdev. Bearing this in mind, the colonial regime unleashed one of the worst communal violence in Kanpur around the same time the three revolutionaries were executed.
As Vidyarthi himself had just been released from prison, he did not have enough time to mobilize people against this eventuality. However, once the flames of communal violence began to burn, he made very determined efforts to save as many people as possible. People saw him rescue trapped people from both communities.

Colonialists sparked one of the worst communal riots in Kanpur when Bhagat Singh, Sukhdev and Rajguru were executed

It was during these repeated efforts that at one point he was stabbed and killed. There are indications that following the death sentence passed on Bhagat Singh, Sukhdev and Rajguru instructions had also been given by the colonial rulers to eliminate Vidyarthi as he was seen as a bridge between the revolutionaries and the Congress. This view is supported in an interview of his daughter Vimla Vidyarthi which was conducted by Suresh Salil who edited and compiled the collected works of Ganesh Shankar Vidyarthi.
Vimla said she does not see the killers as rioters but as people guided by colonial rulers. She recalled a knowledgeable person saying earlier in the day that weapons are being distributed in several localities and it is said that the Lion of Kanpur will be killed today (Kahat hai ki Kanpur ka sheru mara jai).

Of course, the reference of the Lion of Kanpur is to Vidyarthi. Vimla’s final observation was that Vidyarthi’s murder was part of the same conspiracy which led to the hasty execution of Bhagat Singh, Sukhdev and Rajguru.
This is one more reason why the national celebration of the martyrdom day of Bhagat Singh, Rajguru and Sukhdev should be followed also by the observance of the martyrdom day of Ganesh Shankar Vidyarthi. He is an enduring symbol that when we fight for justice, equality, freedom and harmony, a larger unity must be established, ignoring small differences.
Vidyarthi lived this reality by creating a close-knit movement of such forces in the region around Kanpur for almost two decades, which had a much wider impact.
—
*Has written extensively articles, pamphlets, books and short stories on freedom of movement; recent books include “When the Two Streams Met” and “Azadi ke Deewanon Ki Daastaan”